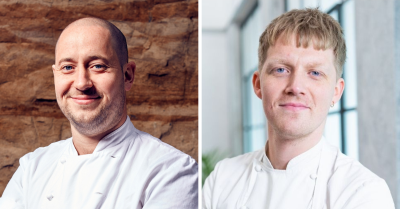 Speaking with Alex Bond, Owner of both the Michelin-starred Alchemillia, and Mollis, The Ledbury’s Head Chef, Tom Spencely, revealed why how he got into hospitality and what it means to work for one of the country’s most renowned restaurants.

Tom appeared on TV screens in 2021 as one of four chefs representing the North East in series 16 of the Great British Menu.

In the programme, Tom competed against Alex as well as Ruth Hansom, Head Chef at The Princess of Shoreditch, and Gareth Bartram, Head Chef of the Michelin star restaurant Winteringham Fields.

Before entering the world of hospitality, Tom originally wanted to become a pilot in the RAF but due to his eyesight he sought a different career and became a chef after leaving school.

“I was probably not meant to sit in an office behind a computer,” explained Tom.

“I’m too practical, too practical based in terms of learning, so that I think really paved the way for what I do today.”

Discussing his proudest moments in his career, Tom revealed: “I was at Sat’s for three or four months before it got second star but being at kitchen table, getting two stars at KT [Kitchen Table] was a proud moment.”

Commenting on his time on the Great British Menu, Tom said: “Being chosen to go on Great British Menu, even though I didn't win or anything like that, still watching the show from a young teenager to finally being on it. I think the first time I watched Great British Menu Sat’s was on it and that's why I wanted to work at Sat’s and then to be on it, that was a proud moment.

After a two-year hiatus, Owner Brett Graham confirmed that he would be reopening of the two Michelin-starred restaurant, The Ledbury, promising even more of attention to detail and a sharper focus on the best produce available.

Commenting on his experiences working for Brett, Tom said: “He's amazing to work for. You just know you're in safe hands, he's got your best interests at heart, he wants you and everyone around you to do the best they possibly can.”

Explaining what Brett wants from his restaurant and his staff, Tom explained: “He says that he's not actually that bothered about his success anymore. He's had his time and the restaurant has been so successful for so many years he wants to give that opportunity of success to the people who contribute an immense amount to the restaurant, and anyone that does that, Brett will literally just do anything he can to support and to make us success of them.”