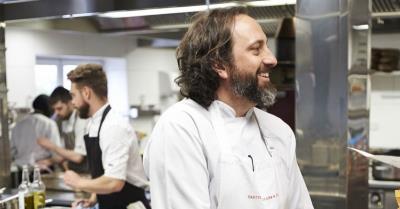 Chef Luke Holder of The Lime Wood and Home Grown Hotels group has come full circle when it comes to recruitment and retention.

"I used to have an attitude of "if people don't like it, there's the door, see you" and expected everybody to give up everything in their life in order to deliver food," he explained.

By perpetuating the idea that chefs aren't entitled to a personal life, his kitchen was chronically short of staff and turnover was huge, racking up hiring costs to the company.

This is when the company's chairman, Robin Hutson, made a big push on staff retention, pondering what could be done to improve staff wellbeing.

One of the first changes they made was to plan rotas three months in advance - meaning the crew can plan what to do with their personal time.

"People often say to me, 'well you don't know what the levels of business are next week, it's alright for you you're at a hotel with a big team' but whatever your challenges are, when it comes to rota writing, engage with your team," he said.

Another seemingly innocuous change was to make sure that staff meals were not an afterthought but a priority.

Rather than one or two chefs bearing the brunt of feeding the whole hotel crew, the task is divided on a section basis, and the food is the same as what is on the corporate business buffet menu.

Not only does this reduce the pressure of mise en place, it increases retention across the whole hotel crew, creates more respect between the different teams; it gives chefs a chance to express themselves on a plate and to receive gentle feedback from their peers.

Crucially, it means that the team get to sit down as a unit, phones switched off, and bond.

"I guarantee that you can take anyone in my kitchen and ask whether it's acceptable to serve bad staff food nowadays, they give you a very clear and direct answer. And I'm proud of that."

The chef has concluded what is dawning on many of us, which is that observing mental wellbeing requires a holistic approach - and dilligent scrutiny of people's behaviours.

What he has also come to realise is that the benefits of doing so translate to revenue gains for the business.

"So if you treat people right and get that puzzle sorted, if you get the product correct, profit will come.

"If you start putting profit before everything else, or your own ego to want to achieve accolades or whatever you're trying to achieve, the casualties by the wayside are there to be seen."