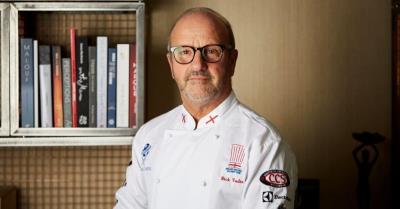 Originally from Fairfield in Manchester, culinary director at Compass Group UK and Ireland Nick Vadis joined the Navy when he finished high school because he knew that it would broaden his horizons.

However, he soon realised that the life of a helicopter mechanic wasn’t for him. When he told his superior, he was asked what he would rather do instead.

"I said, 'I want to be a chef.' Being a chef at the time was the lowest of the low, so once he'd picked himself up off the floor and stopped laughing at me, he let me be a chef."

"I never looked back, it was the best thing I ever did," he said.

24 years later, Nick came out of the Navy with a raft of experience, a teaching degree and a profound appreciation for the structure and diversity of prospects it had offered him.

Then, after some years developing meals for British Airways, contracted by Compass, in 2007, Nick secured the job of executive chef at the contract caterer. In 2012, he became the company's culinary director.

Encouraging fresh talent to join the hospitality industry, and specifically contract catering, is no mean feat considering the current staffing crisis, but he is all ears, and has an exhaustive list of reasons why it is one of the best employment opportunities around.

It’s not just geographic location or type of offering, either; the benefits for anyone wishing to work at Compass are many – employees are offered a career plan, training, flexible work, a safety net, rewards schemes, and more, all without sacrificing the tight-knit atmosphere of being part of a brigade in an independent restaurant.

"There's a lot more cross-pollination between sectors," Nick explained, which helps with retention and letting people move around within the group accruing different experiences.

"It's a game changer - we're giving people more opportunities to develop within."

"People nowadays, they want more out of life," and contract catering can offer that.

The change in how contract catering is perceived has even made it into colleges, where until two decades ago they only ever spoke about hotels and restaurants, he explained.

"Now they're talking about it, because it's good hours, the money is comparable - and in a lot of areas it's better - and your training and development is better."

"Compass is full of people who care, they really do care about the next generation." Even donating some of its educational levies to other firms, he said, "that's what it's all about for me. It may be massive, but it's all about family."