Working in all sectors within a hotel 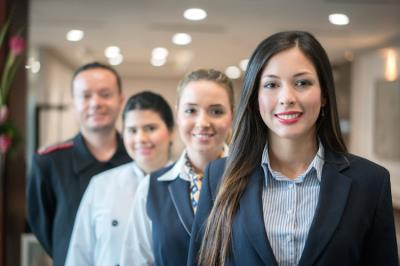 As a Commis Chef, you must show flair and the ability to create innovative recipes but you only have yourself to worry about. As you progress through the ranks, you will be given more responsibility. The ability to manage people, goods, equipment and resources becomes increasingly important. These skills are absolutely imperative in the hotel industry.

The hotel business is extremely competitive, often with low margins and profits dependent on guest bookings. A well regarded restaurant can make the difference, especially in higher quality hotels. Chefs are instrumental in helping a hotel differentiate itself from competitors and are expected to make a contribution not just to the restaurant but to the hotel as a whole.

The hotel environment offers a considerable amount of career flexibility as you can easily apply for other positions within the organisation. Hotels can be better organised than independent restaurants and frequently offer their employees opportunities to work in other areas and to travel. The tendency of hotel staff to stay with their companies for decades certainly suggests that hotels and their kitchens offer positive working environments.

Mark Jarvis, an ex-executive Chef at Bingham Hotel in London, said: "The  hotel is privately owned so we are not part of a chain; so we've got complete freedom. Mark's advice for young Chefs, who are trying to find  work in London is 'be prepared.' He said: "It is going be hard. It's a 24 hour job. It is hard work in itself and then there's the long hours and getting home. If you don't think you will enjoy it, don't come.

"It's a lot more diverse than working in a normal restaurant. A hotel is sort of 24 hours, so there's always something going on. It's just constantly alive  and there's never a dull moment really."

“I love the buzz from a hotel which I find restaurants don't have. There is something always going on!”

Tom Cenci (@TomCenci), formally Head Chef at Duck and Waffle has spoken about his time as a young Chef on his blog, he said: “When work experience opportunities came around I wrote to all the local hotels asking if I could work for two weeks under their guidance.

“I was extremely lucky as Cliveden Hotel replied offering me a stage. I absolutely loved every moment of it and was given a great opportunity after being offered an apprenticeship with Cliveden and to attend college under the academy of culinary arts. I never looked back after that.

“Cliveden Hotel was a great place to learn, it had multiple restaurants, some serving classical dishes and others with modern twists, one of which had a Michelin star. I spent four years in total there and it gave me a great foundation for cooking.”